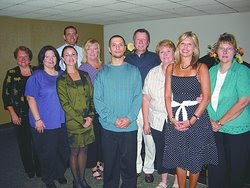 “We want to make sure people know there is a youth alcohol problem in Ohio County and that everyone knows there is something we can do about it,” said Kristen Kroflich, Ohio County project director for the federal Strategic Prevention Framework-State Incentive Grant, which is helping to fund a campaign against youth alcohol abuse in the county.

The Ohio County Substance Abuse Prevention Coalition launched the campaign at a luncheon Sept. 5 at Undo’s in Elm Grove, where Kroflich presented the facts, figures and goals. Attending the presentation were officials from various local agencies that make up the coalition, as well as media, law enforcement and prospective coalition members.

This was taken from an article in the Wheeling News Register.